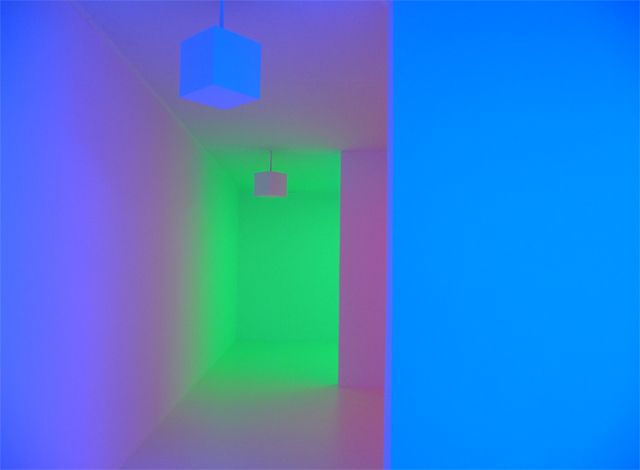 Let there be light! Last Tuesday, I attended the press preview of Hayward Gallery’s new Light show and was left bedazzled by the possibilities of light-based art. With more than 25 illuminated installations and sculptures by major international artists,  it can literally be light-changing especially if you see Olafur Eliasson’s Model for a timeless garden (2011) – my favourite among the entire show. I suggest that you see this piece last if you want to have the best enlightened experience.

The whole show is dazzling in so many ways: It is truly a homage to light and its power to change our perception. The artists who have participated in the show, have long been purveyors of light, even as early as the sixties. But here they do not only explore light as a spatial and environmental experience, they also provide us with a big techie-geeky showmanship. By marrying the art of the light form with technology, we experience some radioactive psychedelic transcendence where we end up getting light years away high without the paraphernalia.  Expect this show to not only will  mess with your senses, but also get ready for some form of eureka moment. Don’t blink.

David Batchelor’s art celebrates the light and the urban altogether. He uses plastics and electricity to evoke the edginess of modern cities.

Jim Campbell stretches the possibility of light into the cinematic realm, often giving it a 3d feel.

For most of his career, Dan Flavin has used fluorescent lights as his medium to create artworks of standard beauty and intensity.

An artistic collaboration between Swiss-born Peter Fischli and David Weiss, both have long explored the use of  light and the homemade to create sculptures and installations.

Ceal Floyer has incorporated the sculptural aspect of light to explore the interplay of idea and physical presence to change perception. Here, Throw suggests light as a puddle of paint thrown at the floor.

Nancy Holt focuses on the use of holes and light to trigger awareness of the physical space. In Holes of Light, the illumination switches from varying points of view, creating an effect of light and shade.

Ann Veronica Jannsen’s Rose installation uses the combination of beams of light and fog to give a cinematic space-time experiences that feel  almost like altered states of consciousness or beyond.

Brigitte Kowanz’s Light Steps are ascending steps of fluorescent lights meant to resemble a flight of stairs. She has been using artificial

Anthony McCall has been a leading figure of using light as a sculptural vehicle. In You and I, Horizontal, this 3d light installation invites the viewer to interact –  around, into and through – with light.

Lamentable are made out of neon lights manipulated to form a sculptural object that interacts with space. Francois Morellet’s early neon works were dynamic but in recent years they have been more static which relate more to architectural space.

Dictatorship in Chile is so much part of the art Chilean artist Ivan Navarro who is now based in New York. Control, repression are all explored thru the medium of light and sculpture in Ivan’s works just like this Reality Show, Burden and the Hayward Fence.

Katie Paterson recreates Moonlight through the use of 289 set of blue lightbulbs as a response to our obsession with recreating daylight.****

British artist Conrad Shawcross is an interesting interplay of moving light and shadows which provide an almost 3d sculptural experience within the realm of light and movement.

This piece uses light, movement and text to create this conceptual superstructure by Cerith Wyn Evans that interplays with the epic poem of James Merrill.

Other light installations in Hayward Gallery (no pictures)