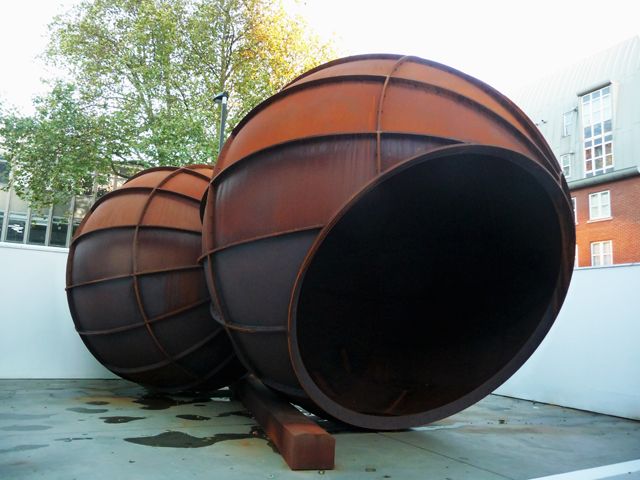 If you ask people whether they like Anish Kapoor’s The Orbit, the opinion will be divided into two. There are those who hate it and calls it an eyesore. For me, it took some time to form an opinion – I had to interact with it a few times when I visited the Olympic park and found out how I have appreciated it more each time.

The Orbit is colossal and it towers above you like a menacing figure. The architectural complexity of the piece alone should be given merit but I think part of the charm of The Orbit – and Anish Kapoor’s large-scale art works –  is that they invite you to Kapoor’s world of illusion; you as a viewer have no choice but to react to the space/illusion he provides. Sometimes, it is not even a question of liking or hating his piece, it is a question of immersion – of being part of the whole ensemble.

At the Lisson gallery (London),  Anish Kapoor’s  earth works do the same. They are small-scale this time but provide the same effect as his large-scale works.  I am mesmerised by the table sculptures that form illusory landscapes made from cement that shoots up into the air or slides into a void while In the Shadow of the Tree and the Knot of the earth II mushrooms into a tiny eruption. On the walls are coral-like-slash-asteroid looking sculptures also made from cement. On one side of the wall sits a canvass made from earth-like pigments. In the basement, we see a continuity of this whole earthly she-bang.  Nothing like the smooth and sleek master of metallic surfaces that we know Kapoor to be.

And yet, in another room, there’s a complete turn around with the colourful fiber glass bowls lined up against the walls – here is the same Kapoor we love  – and more so in monochromatic colours, aquamarine, hot orange, lime green!  Has the colourful spot paintings of Damien Hirst finally rubbed on him? No – far from it –  this room spells like a time machine…I observe these bowls from the sides and front – not knowing what to make of these shapes. I feel like I am lost in space. Mars 2012 should be in this room.

In the yard of the Lisson gallery sits a large-scale sculpture – colossal like The Orbit and made of the same material, Corten steel. The large opening invites you to come along and take a peek inside but stops you from going inside once you see the small hole in the intersection.

The first ever ready-made sculpture from Kapoor – it’s a diesel engine and looks like a misplaced object in this sea of earth-like installations and resin-made sculptures. Crouched in a corner, this machine looks impersonal and devoid of any emotion. It clearly doesn’t belong here and yet it does, which is a point of discourse. Why Anish has suddenly ventured into ready-made sculptures is mind-blogging. Maybe he’s laughing at us now for this intended parody?

An installation in a very dark room can already give you some sort of claustrophobia. A bright light is projected unto the floor which strangely highlights its organic and earth-like surface.