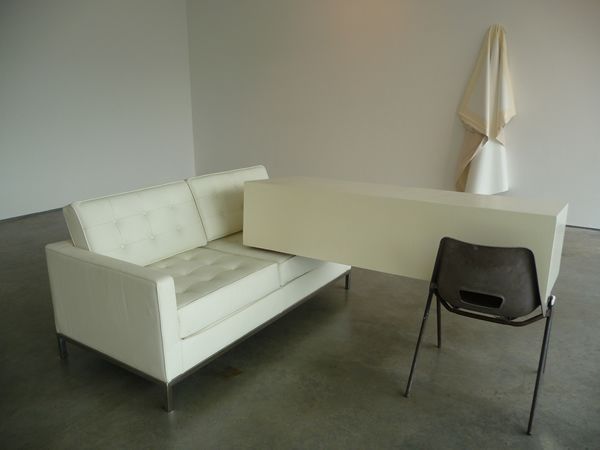 Last Friday in the centre, I was having second thoughts about visiting the Lisson gallery for Angela de la Cruz's exhibit. I had been sick all week and still had a throbbing headache but decided I would drag myself to see her works. After learning about Angela from the Turner prize nomination last year, I knew I gotta go see her, headache or not. I love how she represents paintings in a new way, distorting them, breaking, and deflating them as three-dimensional objects almost as if questioning  or even terminating the role of painting in art today.  Her works lie between the vacuum of painting and sculpture.

Arriving at the gallery, there was a girl with curly short hair, black jacket and sneakers was also waiting to enter the door. But it was the exhibit of visual artist Rashid Rana and not Angela's.

After seeing Rashid's installations, the girl seated herself beside the gallery officer to read the book on Angela de la Cruz while I waved goodbye to her and was off to see the other Lisson gallery where Angela's works are.

In the second gallery, there was a paper sign that said they were temporarily closed during the talk of Angela from 12:30 to 1:30. So Angela was inside giving a talk! Madre Mia. It was 1:20 and I was fumbling around not knowing what to do. Should I create a scene so they can let me enter? Hmm, my usual diplomatic self was fighting my demons. The girl with the curly hair came and I told her, “we can't enter because Angela's there! Hmm she said, “shall we go have a drink first? We went to a kebab stall a few blocks away and drank a 7-up. We talked as fast as we could about art and learned each other's names. Her name was Barbara.

Barbara and I drank those sodas like there was no tomorrow, slammed the cans on the table when we were done then headed back to the gallery. At the corner of the room was Angela de la Cruz herself. She was on her wheelchair because of a serious stroke she had last 2005 but apart from this, she was animated and lively. When we approached her, she asked where we came from and gave thanks when we said we love her works. I was seriously red after meeting her and Barbara whispered to Angela and told her while pointing at me. “She's very shy”. I was. It was my first time to meet an artist of her stature. (Out of respect, I only took photos of her works).

But getting red in front of an artist was not my goal. I was there to contemplate about her pseudo sculptural-paintings. A number of her works were made of compressed and mangled elongated boxes of aluminium protruding on walls. And even though I was distracted about Angela's presence, I had to view each piece in different angles. One looked like a hanging overcoat, another box that looked like a battered yellow taxi cab after someone crashes into it. The compressed blue aluminium looked alive and in the process of being distorted. I could almost hear banging sounds in this piece. In fact, I found these works more aesthetically appealing than her ripped canvases.

In the other room was The Transfer white which was composed of three elements: the sofa, the chair and the white aluminium box. The composition itself was comical – a sort of bizarre and humorous example of minimalism, compressing the living room, the dining room and the workroom in one, a sort of metaphor of how we live life, in a compressed state of agony. I can see why Adrian Searle, the Guardian art critic once said that there is an element of buffoonery in Angela's works. Angela herself admitted that she is inspired by the slapstick and the humour of Jacques Tati and Charlie Chaplin. Upstairs, a ball of folded canvas lay in between art books, behind the desk of the gallery officer. That's Angela pulling out one from her bag of tricks.

PS. Thanks to Lisson gallery for allowing me to shoot photos.