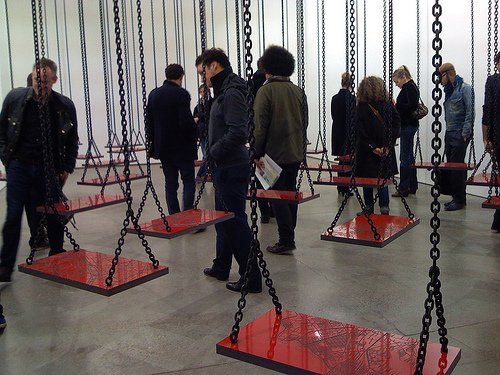 Pach just bought me some new motorcycle boots as we are now daily commuting to Central London by motorcycle. Going by bike in the highway is quite scary and I do catch myself from time to time shutting my eyes whenever we squeeze in-between two trucks. But it's a cheap way to travel compared to taking the tube everyday. So for now, I gotta wear the boots.

They are not just bulky, they are also heavy. And if stilettos can change a woman's walk, I can attest to the fact that, these motorcycle boots have transformed my already detestable walk to something more grotesque. Pach calls my walk something akin to that of Grandma Fratteli in the movie The Goonies.

And if you do remember her, I can say I am also beginning to develop some scowl in my face as I drag these heavy, bulky, new boots to White Cube Mason's Yard to see Mona Hatoum's exhibit Bunker.

In the ground floor gallery is the installation Suspended where 35 red and black wooden swings are chained from the ceiling all placed in an oblique angle. Maps were carved into the seats, each of them being unique. I hardly noticed which cities these maps represent but the whole structure of the installation, even the constricting spaces between the swings also represent a sensation of movement and the act of passing through. Somehow, it was the same sensation I find whenever I go on a motorcycle and swerve for an open space in between cars.

I went around each swing barely checking the map on the seats and avoided being bumped by the swings in constant motion. That was the experience. Every time I see artists tackle issues of landscape (connected with identity), I remember a favourite American artist named Maya Lin and her Systematic Landscapes.

Mona Hatoum was born into a Palestinian family in Beirut, Lebanon and it comes as no surprise that the installation Bunker in lower ground floor suggests the aftermath of a war. Again it looked like an architecture of a city burnt to the ground by war with structures made of steel tubes. Each gaping hole just doubled the eerie sensation. It was a ghost town and it was Hatoum's Beirut.

In the smaller basement, there are three laid out maps of Beirut, Baghdad and Kabul all carefully embellished by cut-out sections in concentric circles which. Though beautiful, they all suggest that these were the same locations affected by bomb blasts.